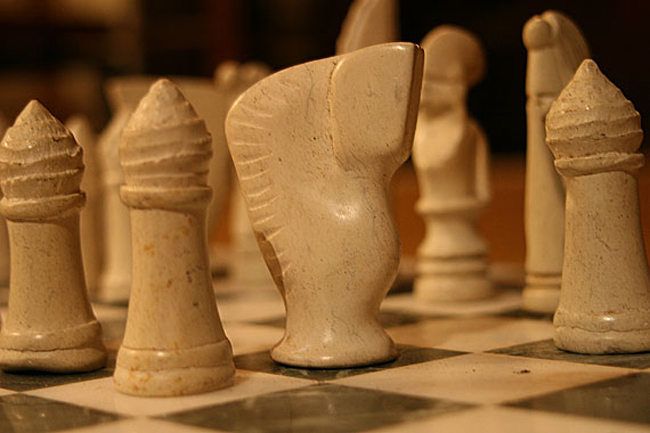 The history of chess goes back many years! Who really invented this amazing game everybody has heard about? What is the origin of this famous spiritual exercise many people play in any place around the world?

There is a myth that the game was invented by one person. In fact, chess was most likely developed over the course of centuries by a number of people most of whom did not even know each other.

Games similar to chess were played during ancient times in an area extending from Greece (pessoi) and Egypt (senet) to China (liubo), but the predecessor of modern chess was an Indian game called Chaturanga which translates as "four divisions of the military"– infantry (pawn), cavalry (knight), elephants (bishop), and chariots (rook).

In 1913 H.J.R. Murray published the “History of Chess”, a 900-page book which was based on 14 years of research using original material from the best chess libraries, translated by specialists.

According to him, Chaturanga first appeared in India in the 6th century AD and was played on an 8x8 board, similar to a chessboard, by two players. Probably Chaturanga was also the predecessor of Chinese Chess “Xiangqi”, which means Elephant Game, and Japanese Chess “Shogi”, which means the General’s Game.

Chaturanga travelled from India to Persia and became part of the education of the Persian nobility. In Persia in the 7th century AD the name was changed to “Chatrang” which subsequently evolved to “Shatranj” and the players started calling “Shāh!” (Persian for King) when attacking the opponent's king. Shatranj was taken up by the Muslim world after the Islamic conquest of Persia, with the pieces largely retaining their Persian names.

From the 9th century and by the year 1000 the game reached South Europe and Russia by at least three routes. Shatranj was introduced to the Iberian Peninsula by the Moors in the 10th century. The Moors converted the Persian word Shatranj into “Shaterej” which gave rise to the Spanish “Ajedrez”. A Persian version called “Shatranj al-muddawara” (circular chess) appeared in Eastern Europe during the Byzantium Empire and took the name “Zatrikion”. Chess eventually reached Russia via Mongolia, where it was played at the beginning of the 7th century and from there also found its way across Siberia into Alaska. For the rest of Europe, the word Shatranj was replaced by versions of the Persian word shah (king).

Around the year 1200, some rules of Shatranj started to be modified in southern Europe, and by 1475 several major changes essentially rendered the game as it is today. Those changes mainly concerned the Queen, the Bishop and the Pawn.

In India, Persia and Arabia, the king’s chief of army, now known as the Queen, was originally male and weak and could move only one square. In Europe the piece was changed to female and, thanks to Spanish Queen Isabella of Castile (1451-1504), became the most valuable and most powerful piece on the board. The abilities of the Bishop have also been changed; the piece could move exactly two squares along the diagonal and could also pass over a piece, but now it can move to any square along the diagonal and cannot pass over a piece. As for the Pawns, they could not move two spaces on the first move (as is the case now) and could only be promoted to a Queen (now they can be promoted to any piece). At the same time the rule of “en passant” (e.p.). was added. Dice, as part of the game in some areas, are no longer used.

In the 16th and 17th century chess was dominated by Spanish and Italian players. They made the first contribution to the game of chess, created the rules and most ideas on how to handle the game.

With 188 member federations, FIDE is among the biggest sports organizations in the world, taking pride in over forty official championships for youngsters, men, women and seniors.

Chess is an affiliate member of, and fully recognized by, National Olympic Committees in 117 countries, and chess as a sport is recognized in 107 countries. These numbers are constantly being revised upwards.

It is very interesting to trace the origins, the history and the evolution of chess because one can gain a great knowledge of the history of human civilization across different communities, cultures and periods of time.